Under the Auspices and in Presence of the Prime Minister: The Association of Palestinian Local Authorities Launches its Strategic Plan 2019-2022 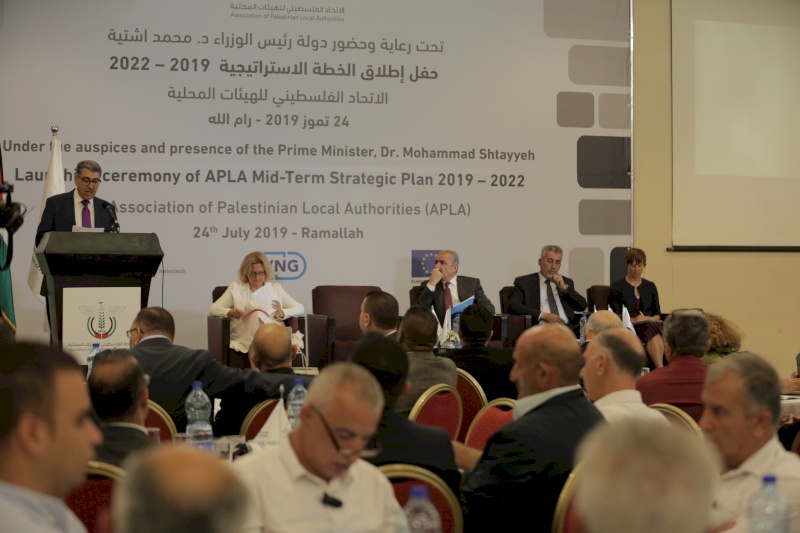 Shtayyeh: We are all partners in APLA’s strategic plan 2019-2022, and the power to collect property tax will be returned to municipalities.

Al-Saleh: APLA is a cornerstone in local governance in Palestine and a strategic partner of the ministry.

In his speech at the launching ceremony of APLA’s strategic plan 2019-2022, Prime Minister Dr. Mohammad Shtayyeh said “We are all partners in APLA’s strategic plan we are launching today. We are partners in the national efforts and in serving the public.” He also announced that to strengthen the budgets of municipalities, the collection of property tax will be returned to them instead of the ministry of finance. Moreover, a committee composed of the Ministry of Finance, the Ministry of Local Government, the Palestinian Energy and Natural Resources Authority and relevant stakeholders in order to prepare clearing between municipalities an 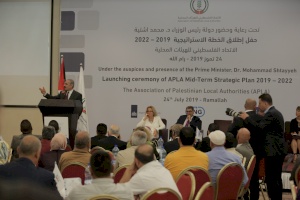 d the Ministry of Finance to ensure the balance of invoices between both parties. “We at the government are fully prepared to review all issues relating to the laws, taxes, and concerns in the best interest of the public. We are establishing a Palestinian state that is based on solid grounds. We are prepared to create a state of harmony with municipalities in service of the public,” Shtayyeh added.

The launching ceremony of APLA’s strategic plan 2019-2022 was held in presence of the Minister of Local Government Eng. Majdi Al-Saleh, President of APLA Eng. Musa Hadid, head of cooperation at the European Union Ms. Alessandra Viezzer, Deputy Head of the Netherlands Mission Ms. Floor Nuiten and over 300 mayor and council members of local authorities, members of APLA.

On his part, APLA President Eng. Hadid said that the strategic plan builds on the efforts of all parties, particularly the Palestinian government, to create local governments that are better able to respond to the needs of Palestinians. The plan adds to the components of the local government sector to build local authorities that have better support and protection as well as greater transparency and integrity. It promotes the values of community participation and constrictive accountability. It opens new prospects for APLA as a sole representative of 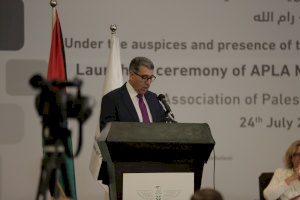 In his speech, Hadid noted that in the preparation of this strategy, APLA was keen on having its policies characterized by taking into account different needs in a manner that ensures empowerment of men, women and youth, as well as creating appropriate circumstances that provide greater opportunities for women to access the decision making process at the local level as equals with men.

In his speech, the Minister of Local Government Eng. Al-Saleh highlighted the participatory relationship between APLA and the Ministry. He stated “this relation means that there is joint responsibility towards developing the local government sector, particularly the legal and legislative framework of the sector. This means that APLA needs to support local authorities in abiding by the relevant laws and regulations, promoting the principles of good governance, promoting community participation and combatting all forms of corruption, misuse of powers, or prejudice towards the interests of certain individuals or categories.” 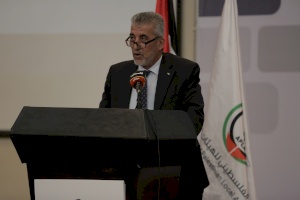 Eng. Al-Saleh said “local authorities are the direct contact with the public. They meet their needs and provide them basic services on a daily basis. Ministries implement their programs through them. They also represent the local identity and community. In this context, APLA’s role is to promote the harmony and cohesion between the local identity and the national identity that represents the hopes and aspirations of the public.” He added, “We are working on building a decentralized system in managing local governance gradually and on the gradual transfer of powers to local authorities. Through our work with the government, we support the gradual transfer of the collection of property tax to local authorities. We will work together on transferring other powers based on the capacities of local authorities.”

Al-Saleh conveyed the Ministry’s keenness to work with APLA on a number of strategies and policies adopted by the ministry and aiming at opening new prospects and focusing the efforts and energy of local authorities on creativity in implementing modern and contemporary approaches. He clarified “such approaches include 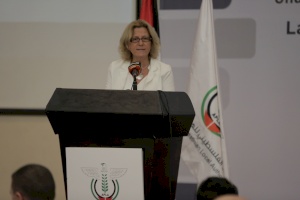 The Head of Cooperation at the European Union Ms. Alessandra Viezzer praised APLA’s efforts in preparing this document. She stressed that the comprehensiveness and success of the plan are the results of numerous consultations by the executive office with all the relevant stakeholders in the local government sector in Palestine, at the local or international level. She clarified that the EU is greatly interested in the local government sector due to its belief in the integral role of local authorities and belief in APLA as an independent organization that represents the collective interests of local authorities and supports building their capacities. She also stressed in her speech on the EU’s fixed stance regarding the two-state solution. 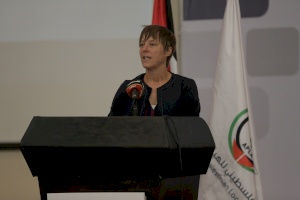 The Deputy Head of Mission of the Netherlands Floor Nuiten stated, “we are proud of the partnership we have with APLA and are very pleased to be part of this success we are celebrating today in launching the strategic plan 2019-2022.” She added that extensive work is ahead of all stakeholders to contribute to the realization of the plan and making it a reality that supports the development of the local government sector in Palestine.

It is worth noting that this ceremony is part of different activities relating to APLA’s strategic plan 2019-2022. It is part of "Area C Resilience development initiative "ARD" project", funded by the EU and the Dutch Ministry of Foreign Affairs, and in partnership with VNG international.a 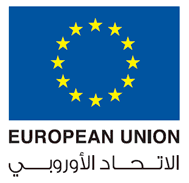